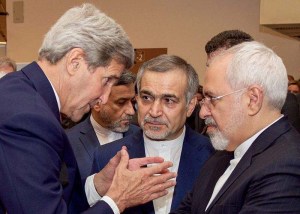 John Adams call your office. That’s our reaction to news — broken by the Globe newspaper in Boston — that Secretary of State Kerry, though now out of office, has been meeting with our Iranian adversary, among others, to try to undercut the Trump administration’s campaign pledge to withdraw from the Iran deal. Adams is the president who, in 1799, signed the Logan Act outlawing private diplomacy.

That certainly appears to be what Mr. Kerry is doing. The Globe calls the Iran deal one of Mr. Kerry’s “most significant accomplishments.” It reports that two weeks ago he met “quietly” at the United Nations and “engaged in some unusual shadow diplomacy with a top-ranking Iranian official.” It names Foreign Minister Zarif. The Globe quotes a “person briefed on the meetings” as saying that it was the second time in two months that the pair met.

What a duplicitous duo. The Globe says the meeting was to “strategize over salvaging a deal they spent years negotiating during the Obama administration.” The paper uses the word “stealthy” to describe their mission to preserve the deal and says that Mr. Kerry has been “using his deep lists of contacts gleaned during his time as the top U.S. diplomat to try to apply pressure on the Trump administration from the outside.”

This has been Mr. Kerry’s modus operandi since, as a young lieutenant just out of the Navy and in the middle of a war, he began freelancing foreign policy. Back then, he snuck off to Paris and met with, among others, representatives of our active wartime enemy, the Viet Cong. Then he came back to America and plumped for their talking points. Later, he testified against American troops before the Senator Foreign Relations committee.

That’s how Mr. Kerry’s career was launched. Now he’s using the same modus operandi to treat with Mr. Zarif to save a deal that even the New York Times concedes was opposed “overwhelmingly” by the United States Congress. And that was tested in the recent election. It pitted, in Hillary Clinton, a one-time state secretary who supported the articles of appeasement with Iran. Mr. Trump opposed the deal and threatened to tear it up.

America thought about this carefully and elected Mr. Trump. He has refused to certify Iranian compliance, and now he is deciding his next step (we’ve long since endorsed withdrawal). The baldness of Mr. Kerry’s breach, though, is in particularly sharp relief, because it takes place amid an effort by the Democrats to overturn the election on the allegation — yet to be leveled in court — that the Trump campaign colluded with Russia.

Mr. Kerry is not working entirely in secret. The Boston Globe reports that he has brief members of Congress, among others, on what he is doing. These, it reports, include the Speaker, Paul Ryan, an opponent of the deal. Mr. Kerry is, though, working with our adversary, Iran, and with various Europeans, who joined President Obama’s envoy at the United Nations in voting for the Iran appeasement, though they knew both houses of Congress were against it.

So what word would one use in respect of Mr. Kerry than “collusion”? And with whom? In Iran, it is an undemocratic state, run by an anti-Semitic camarilla of religious extremists who are preparing an arsenal to deliver weapons of mass destruction against Israel and an America they like to call Satan. So one can put Mr. Kerry down with the rest of the never-Trump faction that seeks to resist — or, in Mr. Kerry’s case — suborn a democratic decision by America’s states.

After watching the movie “Darkest Hour,” we have likened Mr. Kerry to the British foreign secretary who, in 1940, sought to maneuver Churchill into talks with Hitler. We’ve taken to calling Mr. Kerry the “American Halifax.” That, we were told by our famed columnist Conrad Black, is “unfair to Halifax.” After all, Lord Black reiterated to us this evening, Viscount Halifax engaged in no negotiations that were unauthorized by the government. After the latest developments can the American Halifax say the same?

TEANewYork was established as a resource for many things political, issue-oriented and policy-wise, and for things you can actually do, to actively participate in reforming our severely dysfunctional New York State government. What are you waiting for? Jump on in!
View all posts by TEANewYork →
This entry was posted in Uncategorized and tagged american halifax, boston globe, conrad black, javad zarif, john adams, kerry meets with iran, kerry treasonous, kerry undermining trump, kerrys collusion, logan act. Bookmark the permalink.